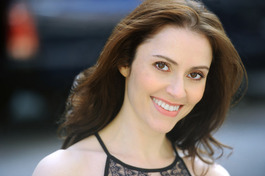 Amy Frances Quint is an actress, voiceover artist and co-founder of Quattro Gatti Theatre Company, a non-profit theatre group dedicated to producing original, ensemble-based, genre bending work for performance in the US as well as abroad.  Amy is American but was born and raised in Rome, Italy. She considers herself an Italian girl in New York or an American girl in Italy (depending on the day!) She has performed, produced and written for venues in New York, regionally and internationally including The Cherry Lane Theatre, LaMAMA, The Ohio Theatre, 59E59, Baltimore Arts Project, The Dublin Fringe and the Edinburgh Fringe Festival. Amy is a graduate of NYU’s Tisch School of the Arts and of the Stella Adler Conservatory of Acting. She is a member of the Frog and Peach Shakespeare Company, where she has appeared in roles including Kate in Taming of the Shrew, Helena in A Midsummer Night’s Dream, Constance in King John, Isabella in Measure for Measure and Tamora in Titus Andronicus. Amy can be heard as the narrator of the audiobook “Family Pictures” by bestselling author Jane Green.

“Amy Frances Quint’s Tamora is just the right blend of sensual and vile, her desire for revenge piercing and always present. While she is horrible (as are most of the characters Shakespeare has created for this play) I couldn’t help but feel sorry for her loss.”

I would pay serious money to see the exquisite Amy Frances Quint as Lady Macbeth in a straight production of the work.
- Steven McKnight

“The dazzling Amy Frances Quint…burns through a startling Isabella.”

Once again I trekked over to The West End Theatre on 86th street for another stellar and unique production from The Frog and Peach Theatre Company; this time it was Measure For Measure, a sexy tale of lawful attempts of repression of you-know-what. Lynnea Benson is directing once again, and the show opens with quite the bawdy pantomime of an act best described as ‘oral mayhem’ setting the stage (if you will pardon the pun) between the seeming Nazi-like fist of “Angelo” (played by F&P stalwart Eric Doss) and mechanizations exploited by Erick Gonzalez playing “Duke Vincentio” and also…but shhh, that’s me telling too much already). Gonzalez is alum of this company and one of those commanding presences that you can never get enough of really.

So too is true of the dazzling Amy Frances Quint. She plays, I’d say more like ‘burns’, through a startling “Isabella” here. Marcus Watson is another notable actor, with his delicious command and physicality creating a slinky “Pompey” for these two hours (that’s another aspect of F&P I adore, they pace a Shakespeare play with perfect ebbs and flows, never letting things get mired down in the language or, as could be with the old Bard, very intricate plots).

The music for the evening was composed by rock and roll royalty, friend-of-the-company and their live accompanist, Ian McDonald of King Crimson/Foreigner fame (try telling me of any other Shakespeare company that can boast this collaboration?)

Once again Frog and Peach offers up an evening of finely realized Shakespeare with a company I truly believe could not be better. I might have offered up only a few names from the cast above, but I assure, you this company is filled to the brim with actors who drip Shakespeare from their pours.

She just put so much depth into these characters….crying, laughing, whatever was called for, Amy was there and so the visual was there too. Loved it.

(The Clock/l’orologio at the Cherry Lane Theatre.)
For a story like this to be absorbing, the actresses need to be fearless and in total command of the material. Here, Lucia Grillo and Amy Frances Quint mesmerized us as two sides of the same woman…Quint’s portrayal of the terrified aspect of the woman was such a thorough examination of fear that she actually came out the other side: her terror made her terrifying. Pale and quivering, the phone cord wrapped ever more tightly around her neck. We half expected a suicide at any moment. Quint even crawled on her belly under her chair, trying to increase the distance between her and her husband. The moment she understood that she would kill him rang like a bell.

As the woman’s character was split between two actresses, either of these portrayals in less capable hands could have been a one-note performance. But each actress brought such nuanced understanding to their roles that neither personality was truncated. Each was richly layered as they spiraled downward, deeper into madness and powerlessness.

The Frog and Peach Theatre Company has done it again: another terrific, wonderful accessible production of Shakespeare. This time it’s The Taming of the Shrew.

While the company does not offer high production value, they make up for it with their intimate, conversational presentations from very skilled actors which far outweigh anything else. I am fine with not much set; the delivery of the language is so satisfactory. It’s clear that these actors and their director Lynnea Benson fill the space of West End Theatre with an appreciative and innovative love of the the Bard’s lines.

This production is somewhat cut in a very neat manner and the time passes so quickly that it left me wanting more. I especially liked that it was mother instead of father who negotiates for her daughters Kate and Bianca. It gives it a more feminist view. Baptista, the mother, is beautifully played by Vivien Landau. Along with Vivien, standing out in the cast were Amy Frances Quint as Kate, Erick Gonzalez as Petruchio, Ryan Dreyer as Grumio, Lenny Ciotti as Tranio and Alexandra Poncelet Del Sole as Bianca. The entire cast is commendable. I especially loved Ryan Dreyer as Grumio – he delivers an absolutely adorable and comical turn (I can’t wait to see him in another, hopefully leading, role).

I adore this theatre company. There’s something very special about being able to walk a few blocks to lose oneself to beautiful, practially lyrical, Shakespeare right in my own neighborhood.

Our friends at the Frog & Peach theatre company are at it again! This time out F&P’s director Lynnea Benson puts her stamp on The Taming Of The Shrew, wrangling an amazing cast of 18 to put on a briskly-paced 2 hours of absolute delight. I have championed Frog & Peach productions before, readings and full productions both, but in my humble opinion this production is the best I’ve seen from the group so far.

From Asa Benally’s costume design choices, to the usual unique way this company has of engaging the audience, to the absolute joy you feel from these actors and actresses investing their all in the language and mayhem of this famous play, to even the wildly imaginative combat scenes choreographed by Marcus Watson, you’d be hard pressed to find Shakespeare done better anyplace.

As it often said and I believe true there are no small parts in theatre and you feel this from F&P’s big casts no matter the production; these are people you feel are honor-bound to work the tradition of translating Shakespeare to modern times while retaining all of the spirit of these wonderful plays.

I should also make mention of the original music heard in The Taming Of The Shrew, written and performed as it is by Ian McDonald, he of classic rock infamy.

The interview segments with Amy Frances Quint — Kate the actor’s wife and Lady Macbeth — were a marvel of deadpan spin and brittle facades…comedy blacker than coffee.

The Frog and Peach Theatre Company has just blown in to the West End Theater with a gutsy new production of The Taming of the Shrew. Although the drunken tinker Christopher Sly and the topsy-turvy Induction are nowhere in sight and Shakespeare’s imaginary Padua has been transferred to a Felliniesque landscape of the early 1960s, the main piece remains intact: a raucous battle of the sexes in which a woman wins by swallowing her pride and surrendering to the man she loves.

Shakespeare borrowed from Gascoigne’s 1566 translation of Ariosto’s Italian I Suppositi for his Bianca sub-plot. Beyond that, it’s difficult to pin down the sources. Some scholars speculate that Katherina is a comic portrayal of Elizabeth I, who was, if not every inch a “shrew,” recognized as a very shrewd woman. Royalty aside, this early comedy has even been compared to The Ugly Duckling, with bad girl Katherina eventually moulting into the good wife. There’s no doubt that it continues to invite a constellation of interpretations, largely because of its sexual politics and its controversial perspective of marriage.

The current production is lively, the central characters well-cas and tightly directed by Lynnnea Benson. Though some of the supporting role performers lack Shakespearean chops, the lead actors take the iambic pentameters in stride and kick up some serious fun in Padua. Amy Frances Quint as Katherina is capable of portraying, in turns, a shrew and submissive wife. Erick Gonzalez, playing opposite her as Petruchio, pours on the machismo and a dash of charm. There’s a fine gender-bending performance by Vivien Landau, as the gentlewoman Baptista.

Not to be overlooked is Alexandra Poncelet Del Sole, as the supposedly demure Bianca. Though she plays the cry baby early on, Poncelet Del Sole’s Bianca becomes more than a foil for Katherina here. She rightly gains a haughty edge in Act 3, Scene 1, first flirting with Lucentio and then rejecting Hortensio. Bianca has three suitors on a string in this play, and Poncelet Del Sole deftly handles each would-be lover.

The Frog and Peach Theatre Company is one of the most durable and best-kept secrets in the New York theater community. Whether it is mounting one of the Bard’s familiar, or not-so-familiar, works, you can bet the actors and creative team will deliver the Shakespearean goods. This Shrew is no exception, and it won’t break your wallet either.

As the foppish and dirty-minded clown Touchstone, Lenny Ciotti is priceless. When his object of lust Audrey (Amy Frances Quint) enters the play later on, together they add delicious color to the play. Quint is coy and coquettish while still being common and salacious, and Ciotti responds to her in pleading fashion, even using his jester’s staff to graphically portray his “growing” physical desire for her.

A Midsummer Night’s Dream: The “Dream” is Shakespeare’s love-letter to the theater – his hilarious tribute to the joy and tsuris of putting on a play that brings the audience to its feet, despite any obstacles. That’s what Peter Quince and his “rude mechanicals” do for the royal couple in this play – and it’s what the gutsy Frog and Peach Theatre Company does at the Church of St. Paul and St. Andrew. Their success is astonishing.

I’ve never seen a production in which the romantic imbroglios of the plot are easier to follow. But she also plumbs the depths of a work that is frightening in its evocation of primal fears and anxieties – of domination and loss of control over oneself and others.

The cast is so brimming talent that each member deserves recognition…the quartet of lovers, each one [is] a vivid profile in youthful passion: Kyla D’Souza, Amy Frances Quint, Jonathan Wexler Reed, and Stephen Siano.

A rarity in the world of off-off Broadway Shakespeare, every one of the show’s fourteen players is well cast and confident on stage…Olivia’s (Amy Frances Quint) slow sensual awakening and the miraculous reunion of the lost siblings are played with touching authenticity. The show offers living proof that young actors can handle Shakespeare – and not by imitating the Brits, but by forging their own fresh interpretation.